Appointment: Appointed to the Board in May 2013 and became Chairman in May 2016 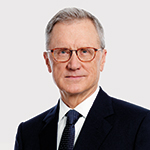