Appointment: Appointed to the Board in May 2016.

Experience: Mr Thompson has sector experience in Finance, Telecoms, Engineering and Oil & Gas. He acts as an independent non-executive director for both listed, including DP Aircraft 1 Limited, and PE funds. Prior to that, he has worked in private equity and was CEO of four autonomous global businesses within Cable & Wireless Plc (operating in both regulated and unregulated markets), and earlier held CEO roles within the Dowty Group. He currently serves as chairman of the States of Guernsey Renewable Energy Team and is a commissioner of the Alderney Gambling Control Commission. He is also an independent member of the Guernsey Tax Tribunal panel. He is a graduate of Brunel (B.Sc), Cranfield (MBA) and Bournemouth (M.Sc) Universities and was an invited member to the UK’s senior defence course RCDS (Royal College of Defence Studies). He is a member of the IoD and holds the IoD’s Certificate and Diploma in Company Direction, is an associate of the Chartered Institute of Arbitration and a chartered Company Secretary. Mr Thompson is a resident of Guernsey and has previously lived and worked in the UK, USA and Germany. 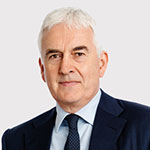